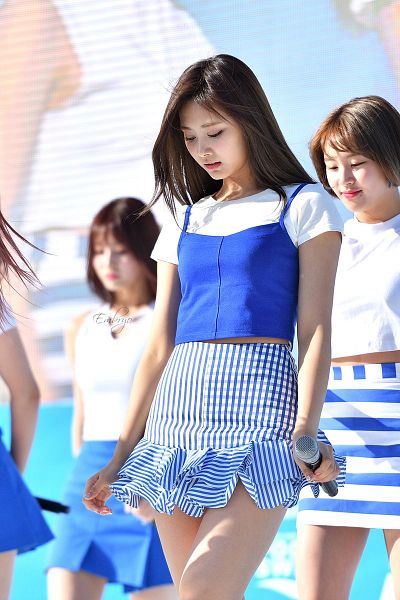 Tzuyu
Tzuyu is the maknae and a dancer in the k-pop girl group Twice. She was born on June 14th, 1999 in Taiwan. Before her debut she appeared in the music video for Miss A’s Only You.
In November 2015, Tzuyu and the other members of Twice appeared on the variety show ‘ My Little Television’. She was provided with her country, Taiwan’s flag and introduced herself as being from Taiwan. The Japanese members of the group were also provided with Japanese flags and introduced themselves as Japanese. However, in January, the Taiwanese born, Chinese based celebrity, Huang An made a post on the popular social media site, Weibo accusing her of being a Taiwanese independence activist. Following this, Tzuyu, Twice and JYP Entertainment received a lot of backlash from Chinese netizens resulting in Twice being removed from Chinese tv, Tzuyu being cut from her endorsement with Chinese smartphone vendor Huawei and JYP Entertainment was forced to suspend all of their activities in China.
On January 15th, JYP Entertainment’s president Park Jin Young released an apology through his Weibo account. JYP also released a video of Tzuyu apologizing saying
“There is only one China, the two sides of the strait are one, and I have always felt proud to be Chinese. I feel extremely apologetic to my company and to Internet friends on both sides of the strait for the hurt that I have caused, and I also feel very guilty”.
This earned Tzuyu support from Taiwanese citizens and current president and all 3 presidential candidates released statements in support of her.
Then president Ma Ying-jeou stated “She had done nothing wrong but was forced to apologize. I want to tell Ms. Chou she has no need to do so, we support her.”
Tsai Ing-wen, the candidate who went on to win the election stated “a citizen of the Republic of China should not be punished for waving her flag and expressing support for her country, Chou Tzuyu has been forced to say the exact opposite of what she originally meant, so this is a serious matter and it has hurt the feelings of the Taiwanese people.”
The incident gained international attention as is almost certain that it affected the election results.
“According to the Hong Kong South China Morning Post (SCMP), 1,340,000 youth in Taiwan reported that they either decided to vote or changed their vote because of her current controversy. This means that Tsai Ing-Wen, Taiwan’s first president, received 19.5% of her votes because of the youth that were affected by the Tzuyu situation.
An official in China said, “Even though the voting rate was at 66%, the lowest since 1996, Tsai receiving 56% of the votes was decisively because of the support of the young voters’ support. Tsai received 6,890,000 votes even with the low voter turnout because the younger generation felt angered by the Tzuyu situation and decided to vote for Tsai instead of the middle-aged, older generation.”
Wang Dan, a political activist, also said, “The ‘Tzuyu situation’ was a slap in the face to the other candidates.” A professor at Taiwan’s Kinmen University said, “The ‘Tzuyu situation’ made Taiwan’s youth stand up. They realized that situations such as the Yanan problem or the ‘one China’ policy could also affect their lives.”